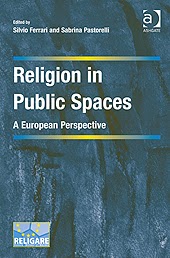 Edited by Silvio Ferrari and Sabrina Pastorelli, both at The University of Milan, ItalySeries : Cultural Diversity and Law in Association with RELIGARE This timely volume discusses the much debated and controversial subject of the presence of religion in the public sphere. The book is divided in three sections. In the first the public/private distinction is studied mainly from a theoretical point of view, through the contributions of lawyers, philosophers and sociologists. In the following sections their proposals are tested through the analysis of two case studies, religious dress codes and places of worship. These sections include discussions on some of the most controversial recent cases from around Europe with contributions from some of the leading experts in the area of law and religion.

Covering a range of very different European countries including Turkey, the UK, Italy and Bulgaria, the book uses comparative case studies to illustrate how practice varies significantly even within Europe. It reveals how familiarization with religious and philosophical diversity in Europe should lead to the modification of legal frameworks historically designed to accommodate majority religions. This in turn should give rise to recognition of new groups and communities and eventually, a more adequate response to the plurality of religions and beliefs in European society. Contents: Religion and rethinking the public-private divide: introduction, Marie-Claire Foblets; Part I Religions and the Public/Private Divide: Public and private, a moving border: a legal-historical perspective, Kjell Å. Modeer; Socio-historical perspectives on the public and private spheres, Adam Seligmann; The 'public-private' divide on drift: what, if any, is its importance for analysing limits of associational religious freedoms?, Veit Bader; Religious freedom and the public-private divide: a broken promise in Europe?, Alessandro Ferrari; The 'public' and the 'private' in the common law and civil law traditions and the regulation of religion, Jean-François Gaudreault-DesBiens and Noura Karazivan; Contested normative cultures. Gendered perspectives on religions and the public/private divide, Hanne Petersen; Religion in the European public spaces: a legal overview, Silvio Ferrari. Part II Religion and the Dress Codes: From front-office to back-office: religious dress crossing the public-private divide in the workplace, Katayoun Alidadi; Religious dress codes: the Turkish case, A. Emre Öktem and Mehmet C. Uzun; Religious dress codes in the United Kingdom, Javier Garcia Oliva; Religious dress codes: the Italian case, Sabrina Pastorelli; Religious dress codes: the Bulgarian case, Maya Kosseva and Iva Kyurkchieva; Comparing burqa debates in Europe: sartorial styles, religious prescriptions and political ideologies, Sara Silvestri. Part III Religion and the Places of Worship: The right to establish and maintain places of worship: the developments of its normative content under international human rights law, Noel G. Villaroman; The places of worship in France and the public/private divide, Anne Fornerod; ‘Stopp Minarett’? The controversy over the building of minarets in Switzerland: religious freedom versus collective identity, Vincenzo Pacillo; Places of worship: between public and private: a comparison between Bulgaria, Italy and the Netherlands, Tymen J. van der Ploeg; Index.

About the Editor: Silvio Ferrari is Professor of Canon Law, University of Milan and President, International Consortium for Law and Religion Studies, Italy. His research interests are in the areas of Church and State in Europe; Comparative law of religions, and Vatican-Israel relations. He has published widely on these and related areas.

Sabrina Pastorelli is research fellow at the Institute of International Law - section of Ecclesiastical and Canon Law - University of Milan, Faculty of Law. She is also a member of the Groupe Sociétés, Religions, Laïcités (GSRL-CNRS/École Pratique des Hautes Études-Sorbonne) and teaching assistant at the Catholic University of Paris - Faculty of Social and Economic Sciences. Her research interests include sociology of religion; new religious movements; law and religion in Europe; religious education; regulation of religious pluralism; state public policy and religion. She is a member of the International Society for the Sociology of Religion (ISSR); the Association for Sociology of Religion (ASR); the Italian Sociological Association (AIS).