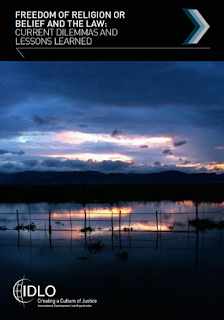 FREEDOM OF RELIGION OR BELIEF:
CURRENT DILEMMAS AND LESSONS LEARNED

These and other complex issues are surveyed in Freedom of Religion or Belief and the Law, along with the role of the law in finding solutions that are effective, fair and sustainable.

Informed by consultative workshops with funding support from the Government of Italy, Freedom of Religion or Belief and the Law emphasizes the complex issues surrounding law and religion.

Freedom of Religion or Belief and the Law is the outcome of a multi-year process to promote informed dialogue on religious tolerance; support international and regional efforts to ensure full respect for the right to religion or belief; and identify, share and strengthen good rule of law practices relating to this right at national levels. With funding support from the Government of Italy, the method adopted has been both consultative and analytical.

The report is premised on the right to freedom of religion or belief as an integral part of universally recognized human rights. Informed by interactive workshops at the Third International Consortium for Law and Religious Studies Conference, the United Nations Human Rights Council Minority Forum Sixth Session on ‘Beyond Freedom of Religion or Belief: Guaranteeing the Rights of Religious Minorities’, the 25th session of the United Nations Human Rights Council, the Italian Interministerial Committee for Human Rights Conference on ‘Freedom of conscience, thought and religion: what limits to social, economic and cultural progress?’, and the United Nations Office of the Special Adviser for the Prevention of Genocide Conference on “The role of religious leaders in preventing incitement to atrocity crimes”, the report highlights the connection between violation of freedom of religion or belief and the risk or onset of serious violations of human rights, including war crimes, crimes against humanity and genocide.

Through expert workshops attended and convened, and using Freedom of Religion or Belief and the Law as a catalyst, consultations emphasized the complex issues surrounding law and religion: How should the law address tensions between religious traditions and human rights? How can law help move beyond tolerance towards true coexistence and respect? How can rites be balanced with rights? How to ensure that liberty is used as a shield and not a sword? What does freedom of religion or belief actually look like in society?

Additionally, through review of available empirical data from the Pew Research Center on freedom of religion or belief linked to government policy in national settings, the report analyzes select examples that illustrate both the complexity of challenges to full respect for the right to freedom of religion or belief and the value of rule of law strategies to help meet those challenges.

Freedom of Religion or Belief and the Law offers informed reflections on the critical importance of religious tolerance in contributing to respect for other human rights and strengthening good governance, the rule of law and peace and security.

IDLO is the only intergovernmental organization exclusively devoted to promoting the rule of law. Governments, multilateral organizations, private foundations and the private sector support our work. We are headquartered in Rome, where we were first founded, and where we continue to enjoy strong support from the Italian government. We are present in The Hague, a city whose hospitality connects us with an unrivaled legal tradition. And we are represented at the United Nations in New York and Geneva, where we help shape the debate about human rights and development.