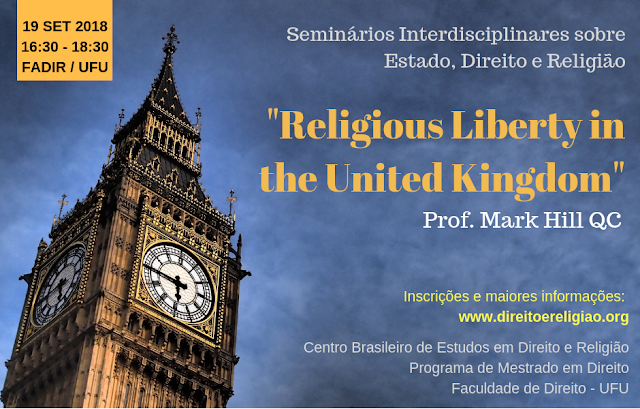 "Religious Liberty in the United Kingdom"

Mark Hill QC is a British Professor and Barrister. He has represented clients in UK Supreme Court and European Court of Human Rights. He is a recorder on the Midland Circuit (sitting in criminal, civil and family cases) and Deputy Judge of Upper Tribunal, Immigration and Asylum Chamber. He sits as judge in ecclesiastical courts of the Church of England and is Visiting Professor at Cardiff University’s Centre for Law and Religion (United Kingdom), at University of Pretoria in South Africa, and at the Dickson Poon School of Law at King’s College, London, and formerly a Visiting Fellow at the Univesity of Cambridge. Publications include Magna Carta, Religion and the Rule of Law, Religion and Law in the United Kingdom, Religion and Discrimination Law in the European Union, Ecclesiastical Law, Religious Liberty and Human Rights, and English Canon Law. He is a Consultant Editor of the Ecclesiastical Law Journal and a member of the Editorial Boards of the Oxford Journal of Law and Religion and the Revista General de Derecho Canónico y Derecho Eclesiástico del Estado. He is Ecumenical Fellow in Canon Law at the Venerable English College in Rome, and a former President of the European Consortium for Church and State Research. He is an accredited mediator, current co-chair, and a founder of BIMA, a charity which promotes faith-based mediation.